Gong Hei Fatt Choy everyone!
Ok, technically since Chinese New Year spans across 15 days, I am not too late. After the nasty clash with Dengue, I’ve been trying to get myself up back on my feet. After a mere 3 weeks of rest, I was back working and slowly spring cleaning the warzone. Thankfully the hubs came back from his business trip a few days before CNY and I could assign him all the menial tasks. However, I have been beating myself up for not being there for the kids. I know they particularly missed my activities so I needed to pull myself together no matter how tough it was.
I managed to put together some activities and here’s sharing with you, if you haven’t already seen them on my IG account. I am glad the kids enjoyed it. It really makes everything worth it when you see their smiles. Mess, there bound to be, but joy from the kids is something which no amount of money can buy. When I see their enthusiasm, I get more motivated to do more for them. With that, I finally decided what my 2017 motto will be :: Focus on grooming my kids. Will need to stay focus in this direction coz Big K is in K2 now and boy, the pressure is so real! Several friends of hers actually transfered to other preschools as they deemed that our kindy isn’t academic enough! *horrors! I do agree to a certain extent as I had initially placed Big K in this kindy as I liked their direction:: Learn through play. However, when I read that 4 in 10 preschoolers have tuition, I am beginning to panic. Firstly, I don’t have the luxury of time to uber the kids around all the time. Secondly, even if I wanted, I can’t seem to find any classes which are held in the mornings. They attend afternoon school you see, and most enrichment only start in the afternoon. Which is another reason why several friends of hers swopped to the morning session. So as much as I’d like to join in the hot-schooling team, I am refraining as it will incur more money and time. In addition, I would really want them to feel that learning is fun and enjoy this period. Furthermore, with my credentials, I am pretty sure I am able to teach my kids. Only problem, I’m bogged down by work and that is eating me up. It doesn’t help that the hubs is travelling a whole lot. Hopefully this year I can do better and be more disciplined in the home learning sector. 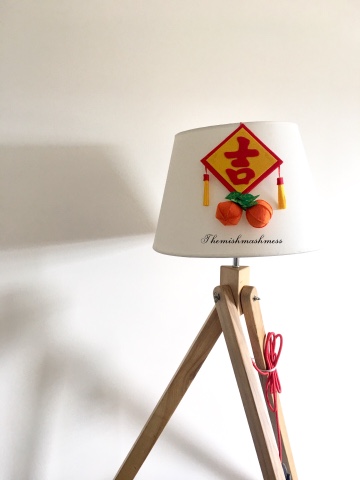 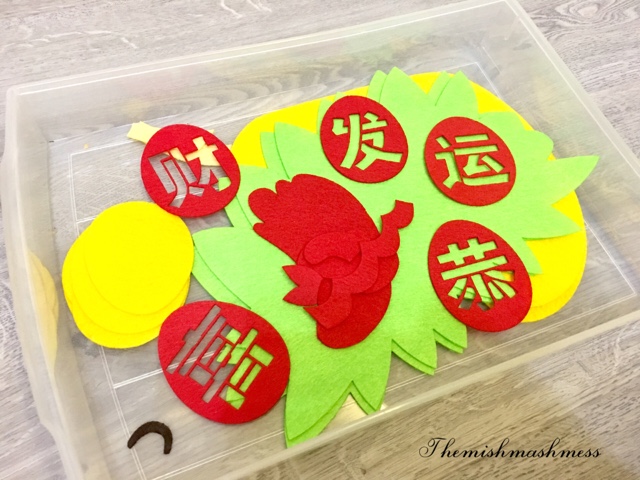 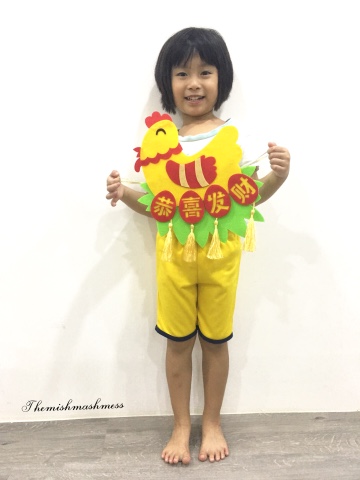 I was thinking of decorating the house and tried to involve the kids as much as I could. I tried to turn every activity into a learning opportunity. With our banner, I had initially worded it as “Year of Rooster” because I was lazy and it looked better if it were to be shorter. Guess what? Big K spotted my grammar mistake and commented “shouldn’t it be Year of THE rooster mama?” Ok, Missy, I had it corrected.The other two felt crafts were put together by us as well. Some bits were a tad difficult for her hence I had to help. Through it, we were able to learn some Chinese words! Score! 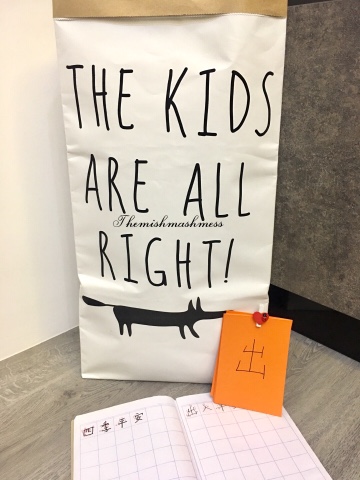 Greetings is a must hence I tried to expose Big K to as many greetings as possible. I had them placed in a flashcard holder and had it standing in my study room for the longest time. Didn’t have the time to execute you see. One day, I spotted her pointing to those words and reading them! WOW! I might have underestimated this girl! 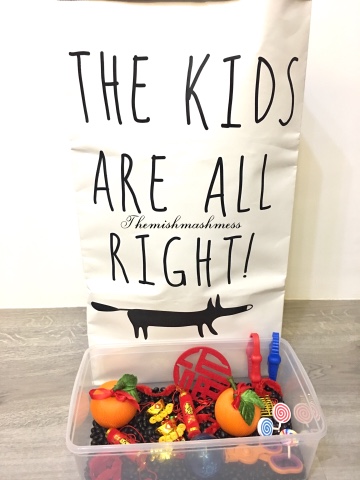 Now, to conduct a home learning session is very challenging with two young kids. I tend to neglect one whilst concentrating on the other. However, the above activity was a hit and both could play. It is a sensory box filled with little CNY trinkets. For Small K, he was practicing his practical life skills by scooping and using the tweezers and for Big K, well, though she was having fun scooping the beans as well. Also, I took the opportunity to explain to her what each trinkets were and the significance of them. 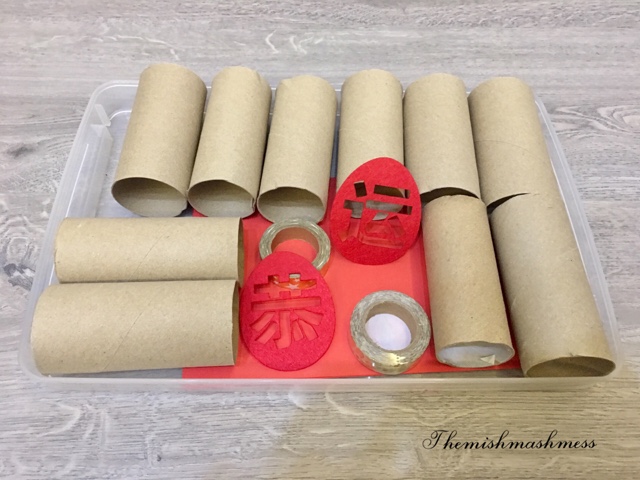 Way before CNY,  I have already started collecting toilet rolls. Usually, my children will take those rolls and turn them into a phone or a spaceship, but knowing that I needed them for a CNY craft, they started to hold back their creativity and saved them for me. The end product was a one-of-a-kind firecracker! 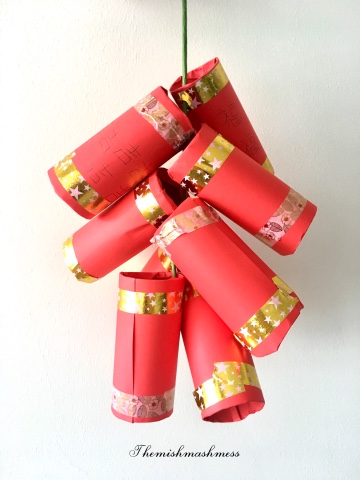 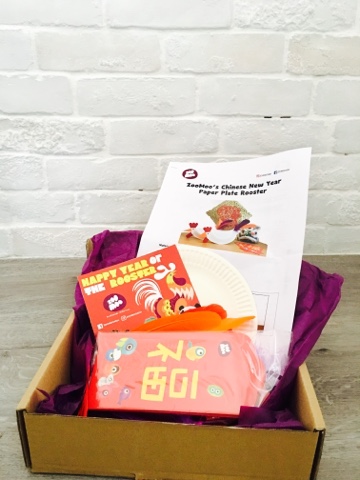 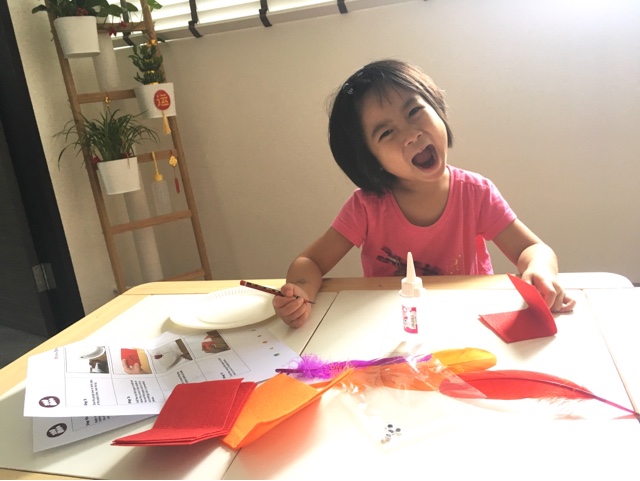 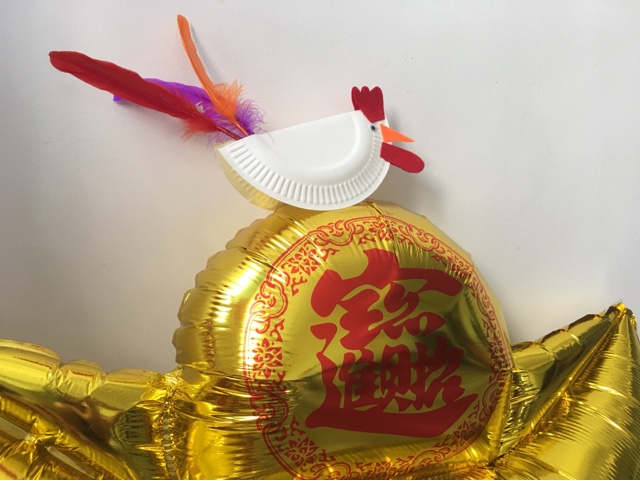 I was getting a tad tired (that is a major understatement!) after all the CNY visitations and had to return to work on Day 4 so this parcel from ZooMooAsia was very timely! I gave Big K instructions and she worked her way to create this paper plate chicken. She took a while, but that meant more time for me prepare lunch for them! 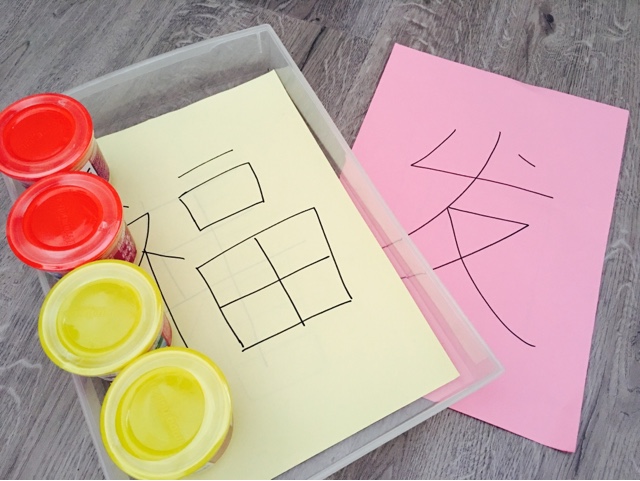 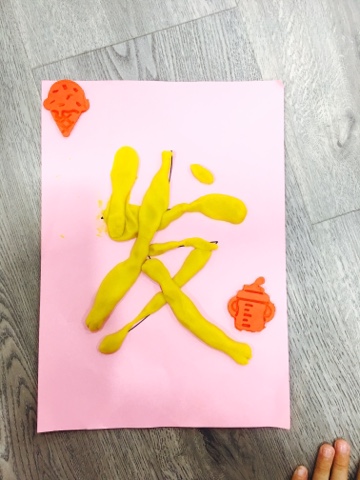 We had friends coming on Day 3 and I quickly whipped up this activity as all kids love playdoh. I didn’t want the children to end up playing mindlessly, hence I wrote some Chinese characters and got them to place the playdoh over it. Win! They learned and had fun as well! By the end of the night, all the kiddos didn’t want to leave! teehee 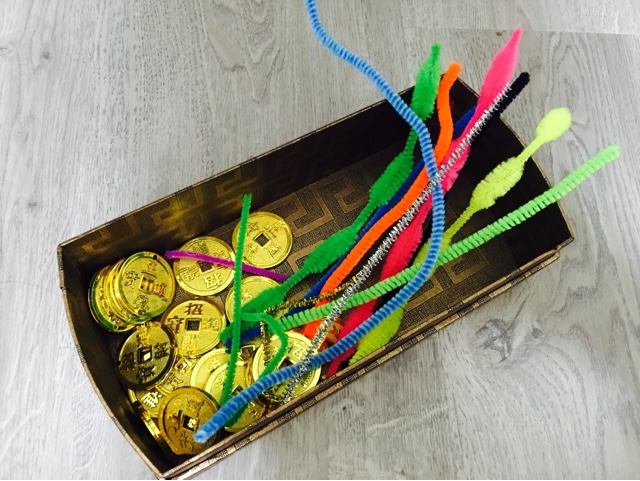 Stringing the gold coins. An activity inspired by @Playlexue. I managed to get these gold coins from Japan Home. They were going at 10% discount so it was a steal! This activity was great for Small K to work on his motor skills. 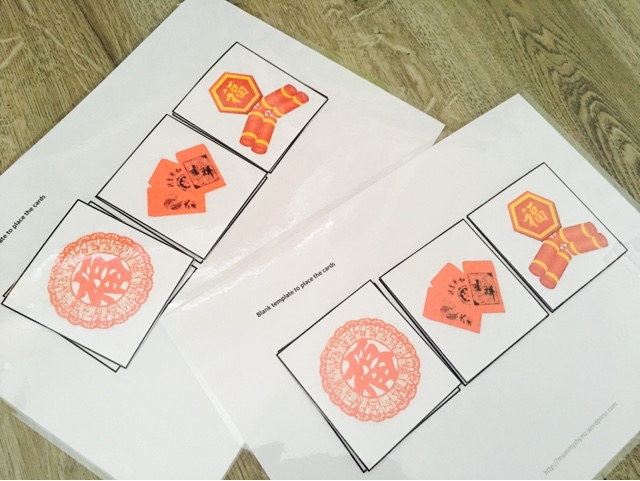 Printables! My favourite. This is a spatial memory game and can be reused several times. 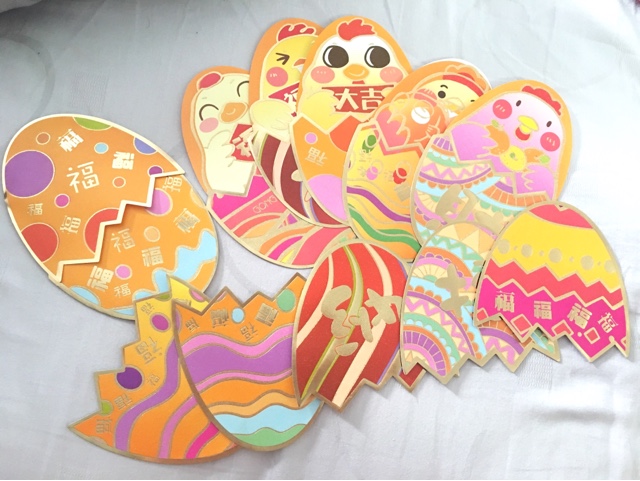 I bought these adorable ang bao envelopes from Taobao and they are not only cute, but perfect for my two Ks to do a matching activity! 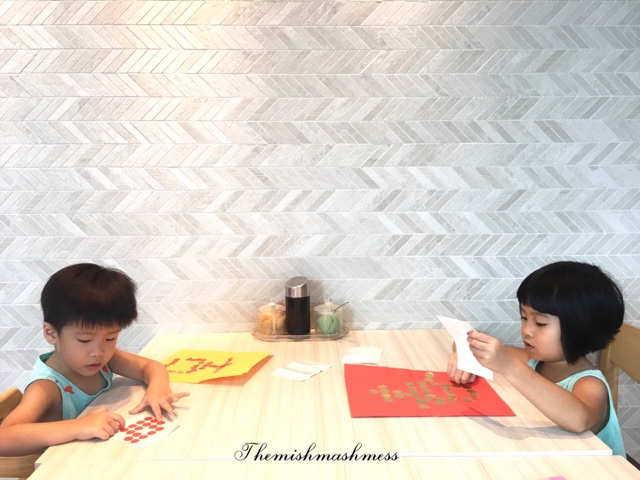 We went out for lunch on Day 3 and often, I would bring along pens and paper for them to draw. Today, I put in a little more effort and got them to stick dot stickers on auspicious Chinese characters. They were entertained and I had my short respite. Score once again! 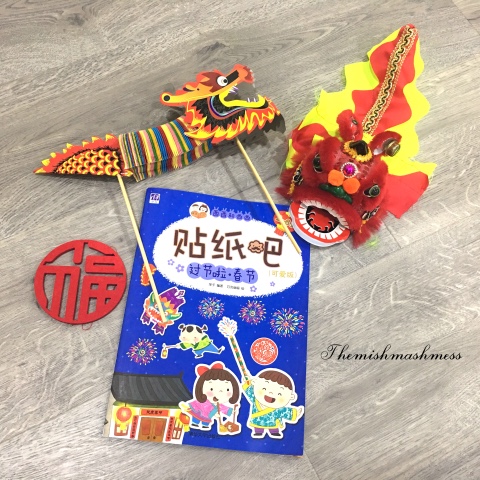 I managed to get the lion and dragon props from Japan Home. I had always wanted these. The kids had great fun doing the lion dance and forced us to join in the dance. We looked utterly silly but it was good fun to play with the kids. The book, recommended by @2mamas4kids, which I got from Maha Yuyi was perfect for the festival. As in the picture below, it has stickers and that, is always a hit with children. I made the papa tell the story about Nian to the kids. Small K wasn’t too keen, but thankfully Big K listened. Why did papa have to read them the story? Well, coz it’s in CHINESE! *Gulp 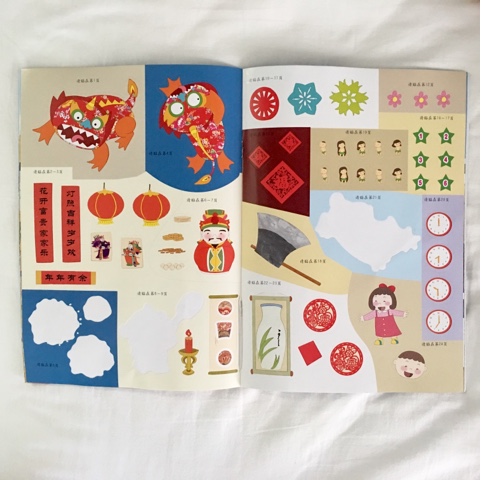 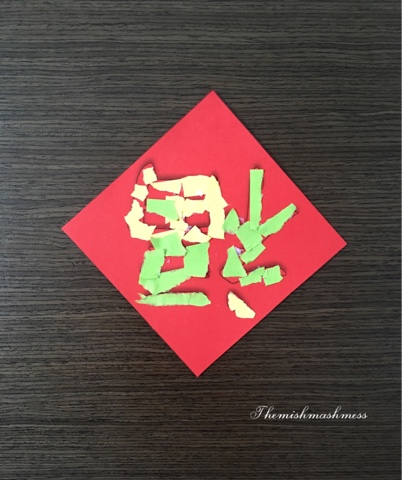 To get some of the characters imprinted in Big K’s brains, I incorporated craft. She loved it and again it was a win-win situation as we could use it for our Show-and-tell! 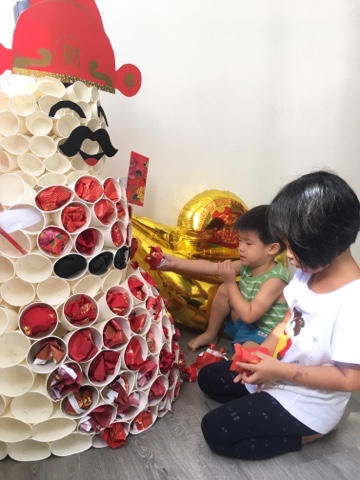 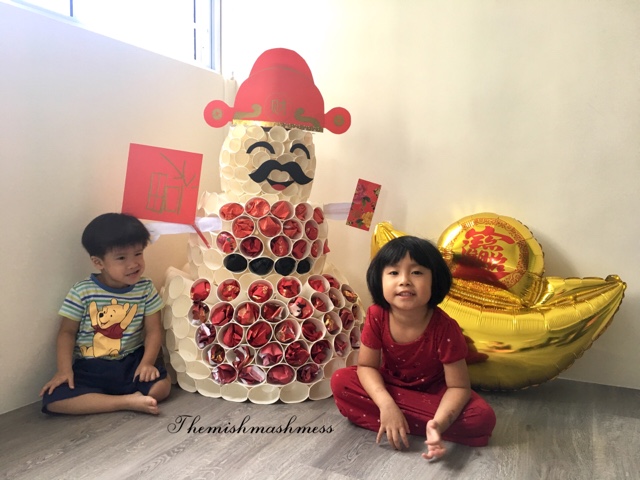 The biggest activity has got to be this God of Fortune! Remember I had a papercup snowman for Christmas? You can recap over here. Well, I gave it a makeover and now it is my 财神爷! Hopefully he brings us prosperity! The effort wasn’t solely mine as the kids helped to crush the red packets and stuffed them into the cups. Great way to build Small K’s motor skills once again. I told the kids that they had to keep the house neat and tidy during Chinese New Year so that the God of Fortune will come to our house and bless us. And guess what? On day one, Big K woke up bright and early and asked me where were the presents. I was puzzled but later i realised that she thought the God of Fortune is like Santa Claus who would bring her presents. hahahaha… hmm, now I need to think of ways to recycle/ upcycle this masterpiece after CNY! Any suggestions? 😛 Hope everyone is enjoying this festive period! Eat more and win more!
Here’s wishing all of you once again, a very Happy New Year and hope things are smooth sailing in the year of the rooster!

★ Teachers Helping Teachers!
★ We are intended to be used by teachers only who exchange their ideas and creations with each other freely so as to help inspire one another with exciting ideas for educating their students.
★ That can entail talking about classroom activities, crafts, discussions of your own personal experience, or just blogging about your working day. We welcome anything you want to share!
★ Join Us and Start Blogging!